Arsenic containing sprays have been used on horticultural land since approx. 1880 in New Zealand. Lead arsenate has been used most often with copper arsenate as a close second. These arsenic containing sprays have been used well into the 1970's. During this century of spraying the residues have accumulated in the soil. Especially arsenic is of concern due to its ability to bind with the organic matter in the soil and with clay particles.

Arsenic is a metal and will not breakdown in the soil or groundwater. At some spray sheds concentrations of over 5.800 mg/kg have been found, close to 200 times the national NZ guideline level (30 mg/kg). 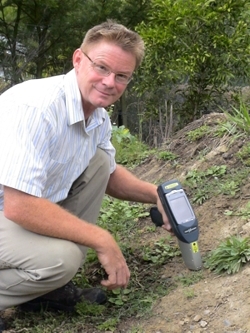 Other persistent chemicals used (and often found) at horticultural land are DDT and other chemicals of the Organochlorine pesticide group. Even though the modern' Organonitrate / Organophosphate pesticides are said to breakdown much faster, this breakdown is sometimes inhibited by the presence of Arsenic. So in Arsenic hotspots these chemicals can be present in significant concentrations.

Hotspots are not only found at the spray shed. Other areas include the area(s) where the chemicals have been mixed (often close to the bore or well), stored and disposed off.

Picture left: Measuring arsenic and other heavy metal concentrations in soil can be done in seconds using a portable XRF analyser

In orchards hotspots can be present at seemingly random' locations. However after the investigation of tenths of these properties the hotspots outside the shed areas generally occur:

•  At the connections of spray-hydrant systems

•  At ends of rows, where the sprayer may have taken longer to pass (and not switched off)

•  Areas where the old paddle sprayer' may have got stuck which resulted in draining of the chemical tank before it could be pulled from the mud.

•  At places where old trees were burned (this concentrated the spray residue on their bark into the ashes, often identifiable by a thicker top-soil.

•  In deep tree root holes; when replanting the trees were pulled out and the holes filled with (contaminated) top-soil.

Clearly there are multiple reasons for the existence of small and larger hotspots . On an average small orchard of 10 acres, between 5 and 15 hotspots with arsenic concentrations between 3 and 10 times the NZ national guideline levels may be present. When the average concentration of arsenic is low or close to background levels mixing in small hotspots may not be detrimental to the final result, however the closer the average concentration is to the guideline level, the more dangerous this practice becomes as can be seen in the calculation examples for hotspots .

What to look for?

When interested in a property the simplest way to identify if there may be problems is to take a few samples around the spray shed and a few in the orchard (preferably where old pear trees are present) and mix these into 2 composite samples (the spray shed samples together and the pear-block samples together), possibly you can make similar composites from other areas. Send the samples to Hill Laboratories in Hamilton. Turn-around time for sample analysis is between 5 and 10 days. When the analysis results show Arsenic levels well over 30 mg/kg (national NZ guideline level) you should seriously consider a professional survey of the property before purchase to establish :

Of course engaging a professional who has an XRF analyser at the initial stage can get you the information on arsenic levels on the same day. He/she may also inform you on other protential contamination issues on the site such as:

•  copper from copper sprays, even present on organic properties / vineyards.

•  Polycyclic Aromatic Hydrocarbons (PAH)result from burning waste / waste-oil (frost protection), or used as dust-suppressant on paths (the PAH's from this source were one of the reasons for the closure of the child-care centres in Auckland in 2005-2006.

•  Many other contaminants may be present when other activities have been undertaken on site.

How can you find out if contamination is present?

As the most dominant contaminants are heavy metals, the quickest way is by an XRF survey'. With an XRF (X-ray fluorescence) detector heavy metals like Arsenic, Copper or Lead in soil can be analysed in about 30 seconds per sample. During a 1 day survey the area around the sheds , well-bore area, and along some lines through the orchard a consice picture can be made up of the potential contaminant status.

Knowing the contaminant status before buying, or having your own date in case of selling, gives you a much better position in the final property price negotiation.

An XRF survey will not detect the modern' horticultural chemicals. They can only be analysed in the laboratory. Turnaround time is about 5  10 days. Costs can be reduced by compositing some samples into one, however the accuracy of the results is greatly reduced (both in terms of detection and in location).

The presence of the glass houses, old spray-sheds, other activities on site is often known to people living close to the property in the area for a long time, however their memory of the exact position may be out by 100 m or more especially when new buildings are placed or tree lines have disappeared, which would have been marker points for them. Careful interviewing can, however, reveal one or more potential contaminant hotspot locations.